Note: for my followup review on the Fashion Industry in 2017 read: As Subtle as the Pose – 3 Years Later

About ten years ago when the internet bubble popped, I took up a new career to pay the rent. I had a good camera back before everyone had one on their phones. Fortunately I was in L.A., so I hung out my shingle and started doing headshots and model portfolios and was fairly decent at it. I was eventually published. I worked with many beginning models, some of whom eventually “made it” in the fashion industry. But the more I learned about the industry, the more I loathed to participate in it.

For one, I found that there is only one body type acceptable for females in standard fashion modeling: 5’10”-5’11”, 34-24-34 (bust-waist-hips, in inches). No exceptions. If her hips were 36″ she’d be told she was bottom heavy. One model who was over six feet told me that she had to put 5-foot-11 3/4″ on her resume. That was “agency code” for models six feet and over. No female model revealed that she was over six feet, I was informed, because that didn’t fit the standard. Do you want to talk plus size modeling? In New York, plus size is no larger than a size ten, preferably an eight. In L.A. it can be up to 14/16, however her body must be “in proportion” meaning no apparent fat.

Another thing that disturbed me was that the top agencies were hiring women younger and younger. I’d look at the “New Faces” portfolios in their rosters and they reminded me of Brooke Shields in Pretty Baby. Girls as young as fourteen were being used in spreads depicting adults. And normally, a model will “age out” of the business at twenty-three. Of course there are exceptions to all these rules: Kate Moss is 5’6″ and over the age of twenty-three. But we’re talking the women in the standard “stable” of the top agencies.

My clients that were new to the industry were sweet, lovely girls with good old 1940’s stars in their eyes. They dreamed of the runway, Paris, Milan, and that one ad or spread in Vogue that would launch their career.  I couldn’t bear to see these women enter an industry that would ultimately victimize them. During one shoot, I learned that my client was in the process of getting her PhD in rocket science. Gorgeous woman. Everyone told her she should be a model, so she was giving it a shot. During the shoot I wanted to scream, “Stop! Run now and go back to school!”

So what’s in the title of this post? Well, ten years later the modeling/fashion industry is coming under attack for the depiction of women. Thankfully, the public is now standing up to the non-realistic body types, the Photoshopping, the starvation, and the portrayal of women in advertising.

With this renewed awareness, I started noticing that it can be as subtle as the pose. I, myself, told models to hunch their shoulders, lean forward, angle the head. Industry standard. But why was it industry standard? After reviewing a smattering of ads, I realized that the poses were basically designed to keep women “in their place.”

I created four categories of poses in which most of the ads I reviewed fell into one ore more: 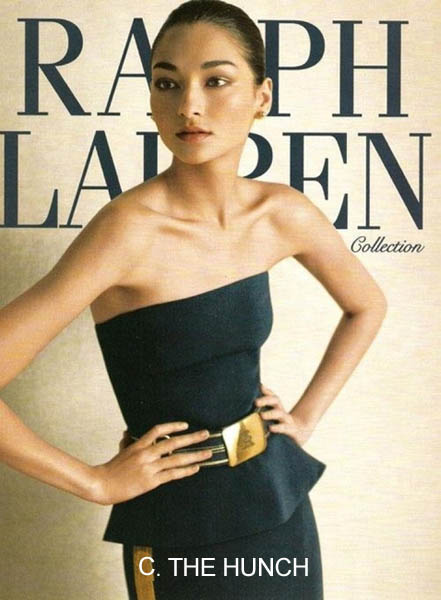 A.)  SCARED/VICTIM – She’s looking over her shoulder or her facial expression is frightened. She has her hands up in protective or shielding position. She’s pulling away from a man. She’s dead. Any image depicting the woman as victim.

B.) POSITIONED FOR SEX/UNDRESSED – She is set up for sex: lying supine or close to it. Her legs are spread. She’s on a bed. She’s in a state of undress in which she wouldn’t (realistically) be allowed in public. Something is in her mouth.

C.)  NON-THREATENING/DEMURE/CHILDLIKE – Head angled. Eyes looking away, down. The classic “hunch” pose of the upper torso. Body is not square to the camera. Chin is down. Body language depicting submission, weakness.

D.) OBJECTIFIED/NON-HUMAN/ONE OF MANY – No face or her face is obscured. A group of women all dressed and made up the same. No individuality. A product.

Do this experiment with me: the next time you see a fashion ad or spread in a magazine, see if it fits into one of these categories. Decide if the photograph helps the female image or hurts it? Here are a couple samples I’ve found: 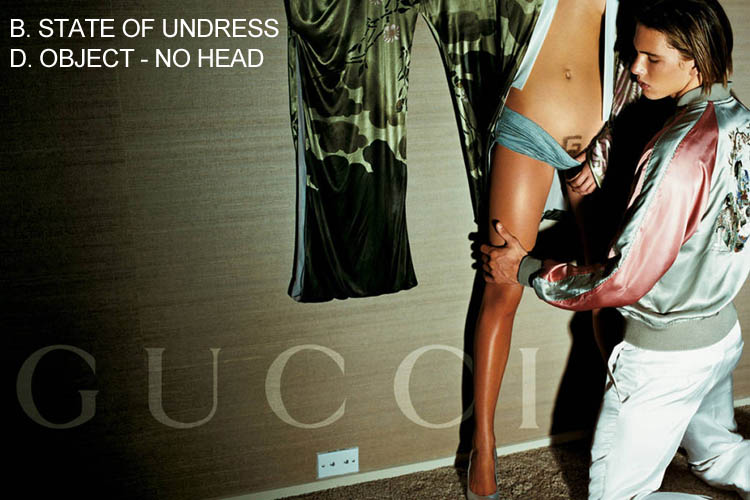 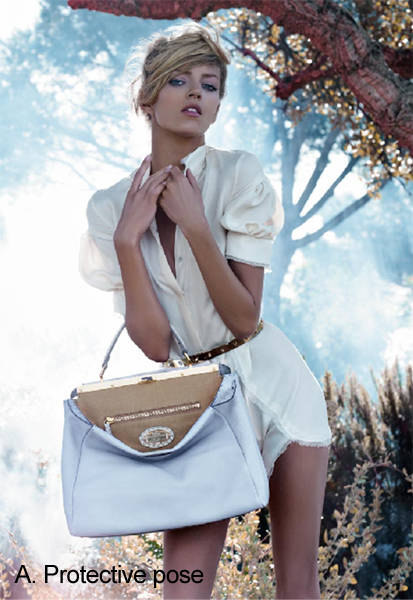 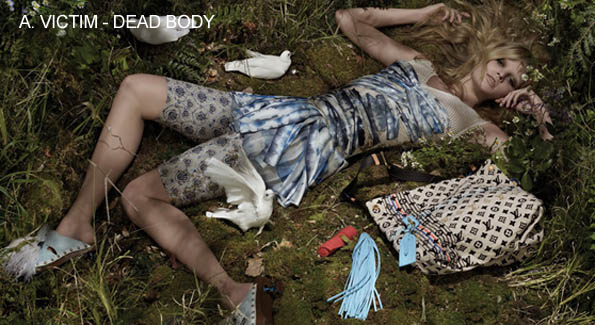 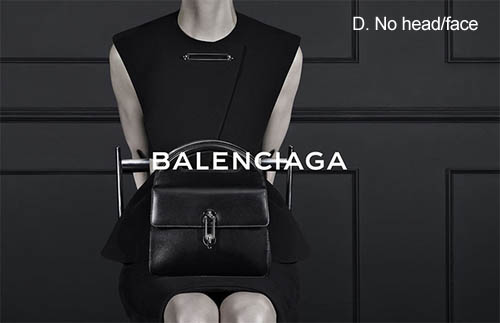 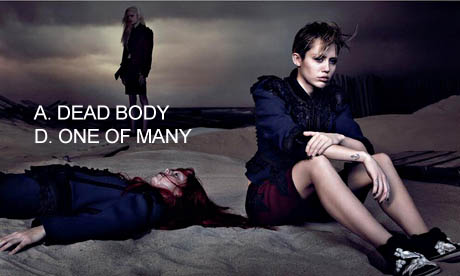 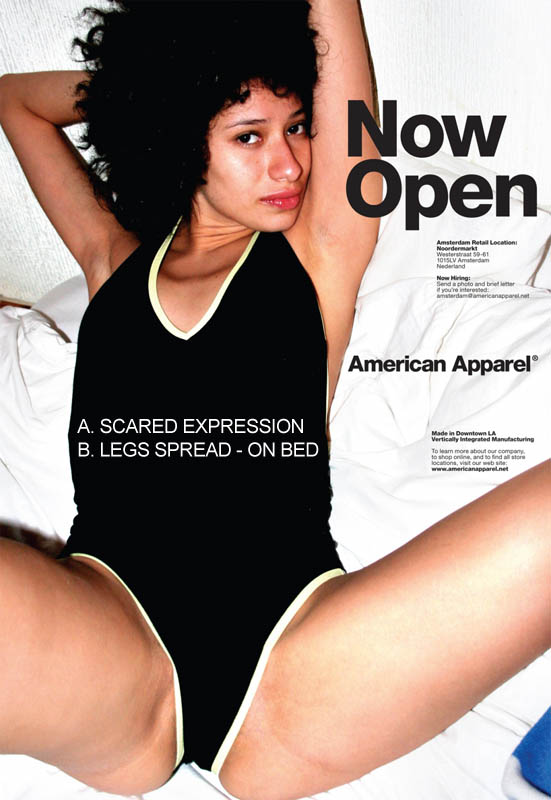 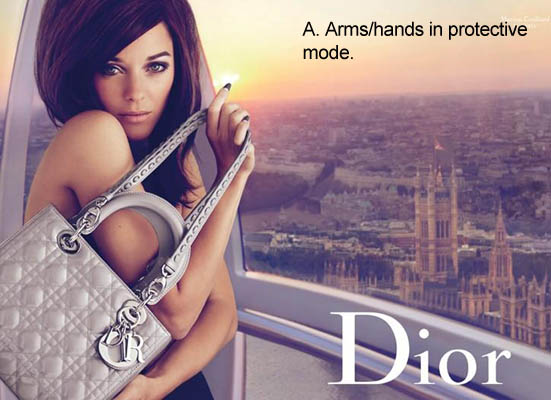 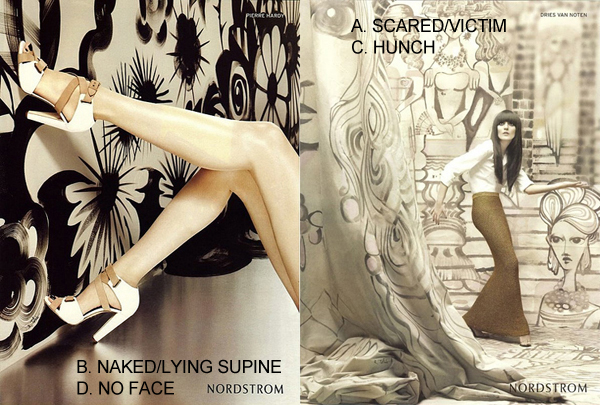 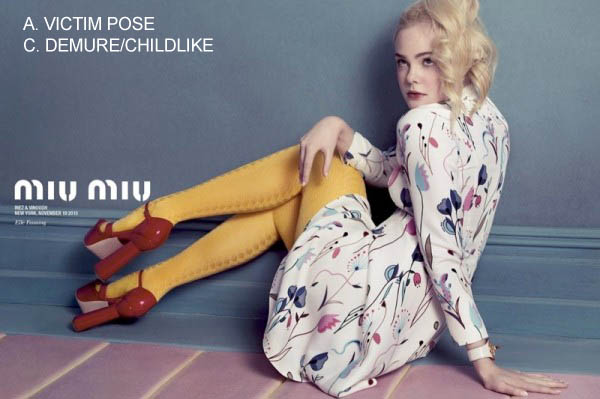 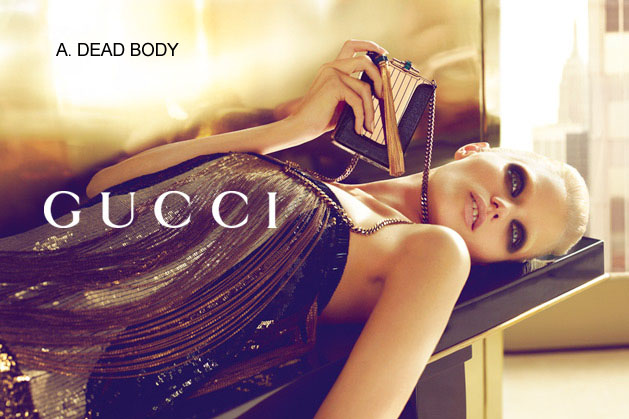 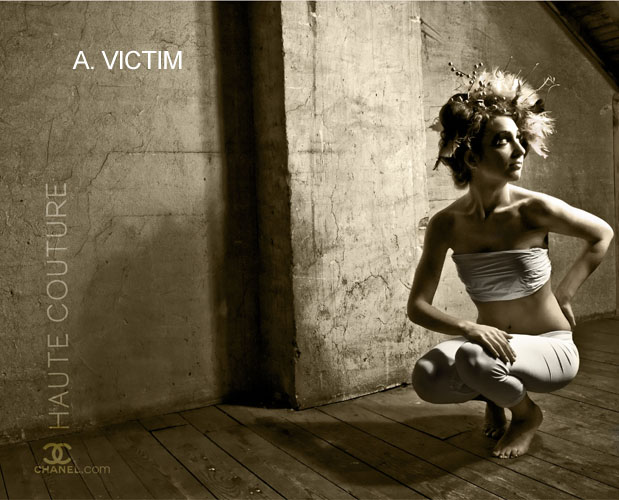 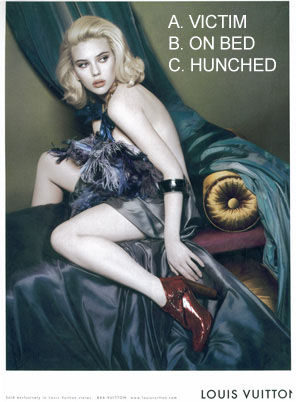 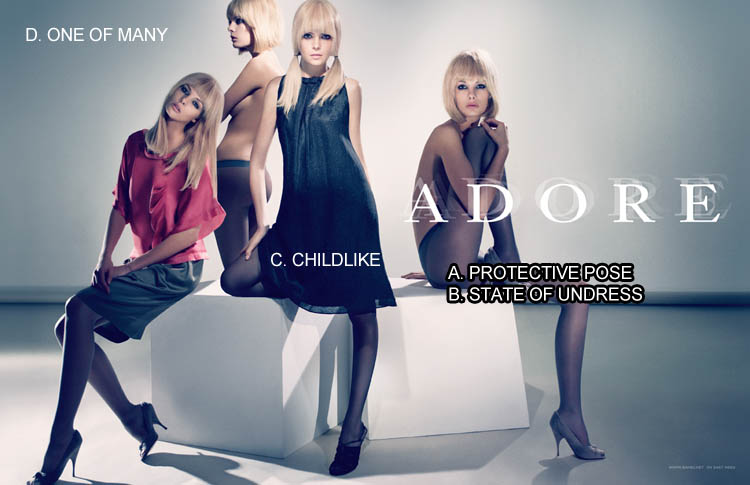 A message to the photographers, stylists, ad agencies and everyone else involved with these shoots: are you empowering women or victimizing them? Won’t it enhance the brand to change this?