I wrote As Subtle as the Pose three years ago, about how women were depicted in fashion advertising. The article received a lot of attention, especially from the feminist media, and I was honored to have it reprinted in the Ms. Magazine blog.

In it, I had created four categories in which I placed the images of women found in a 2014 issue of Vogue Magazine:

A.) SCARED/VICTIM – She’s looking over her shoulder or her facial expression is frightened. She has her hands up in protective or shielding position. She’s pulling away from a man. She’s dead. Any image depicting the woman as victim.

B.) POSITIONED FOR SEX/UNDRESSED – She is set up for sex: lying supine or close to it. Her legs are spread. She’s on a bed. She’s in a state of undress in which she wouldn’t (realistically) be allowed in public. Something is in her mouth.

C.) NON-THREATENING/DEMURE/CHILDLIKE – Head angled. Eyes looking away, down. The classic “hunch” pose of the upper torso. Body is not square to the camera. Chin is down. Body language depicting submission, weakness.

D.) OBJECTIFIED/NON-HUMAN/ONE OF MANY – No face or her face is obscured. A group of women all dressed and made up the same. No individuality. A product.

But now, since it had been three years since I wrote it, I was curious if things had changed in the fashion industry. Now that the industry is continuing to be called out on misogyny, had it made a difference? To see, I picked up the September 2017 issue of Marie Claire magazine, as the fall issues tend to be the largest. Of the advertisements with humans in them, here were my findings: 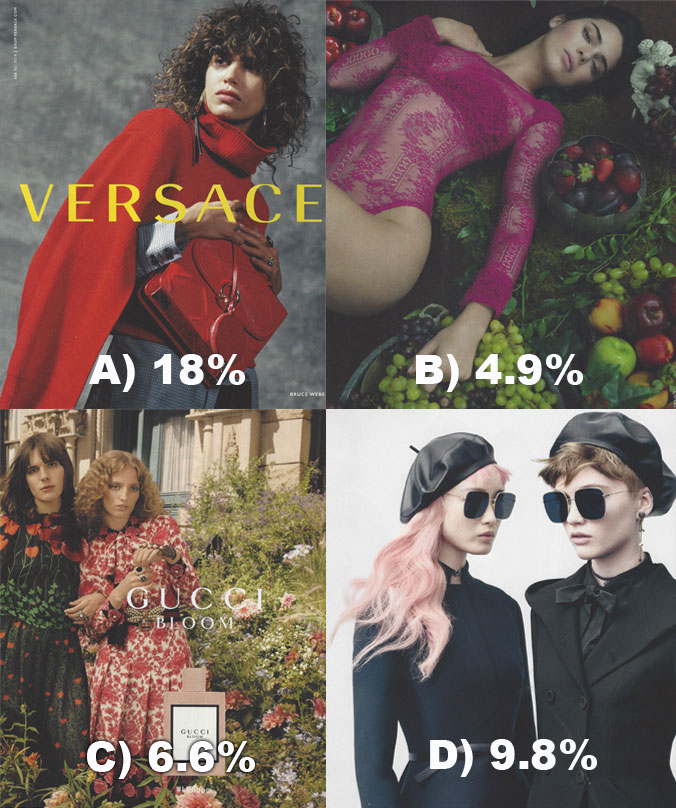 I eliminated ads that were “neutral” such as beauty ads of just the face that didn’t fall into any category. Some of the images fell into multiple categories. But here’s the good news! I created a new category in which the majority of the ads were placed… 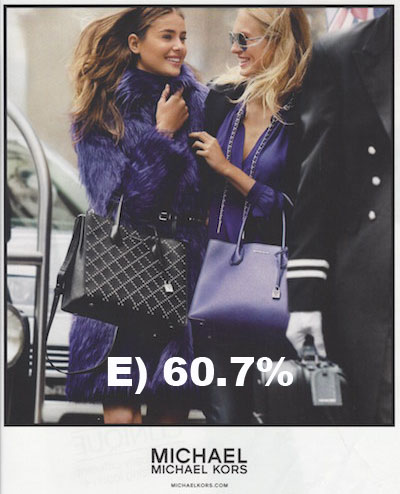 I defined this category with the following criteria:

Several of the ads that fell into Category E, however, gave mixed messages. For example, this one from Chanel which shows the same model in a weak/guarded pose (left), and a strong pose (right) with hands on hips, directly facing the camera, ready to take you on.

I was disappointed in the two ads that showed women in suits, pictured below. Would these outfits have been allowed in any workplace? In the Maybelline ad (left) the skirt was barely below the model’s ass. I will give Maybelline kudos, though, for having the woman shot from below. But she still has an awkward lean back–one of the weaker poses from the “old days.” In the Ralph Lauren ad (right) you’ll notice that the model’s shirt is unbuttoned to her waist. Granted, she might be off work and unwinding, so this one could go either way. At least she looks like a woman in power and I’ll give them a star for their tagline, Woman Above All. 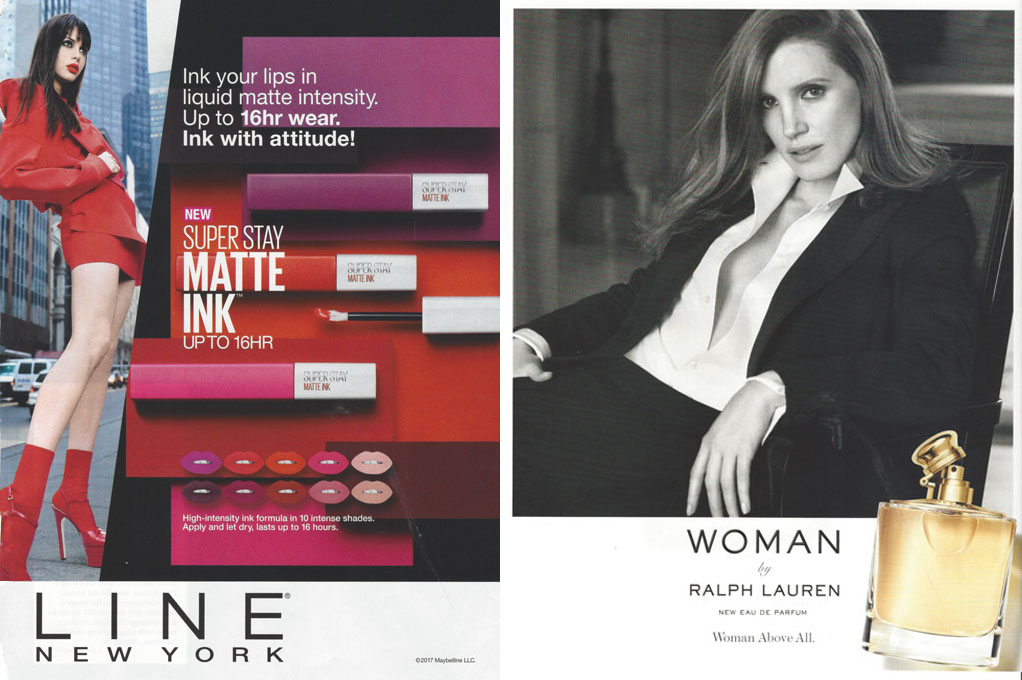 I would like to give huge props to Marie Claire for their editorial spreads, which 100% depict women in strong, powerful positions. The spread on Emma Stone is gorgeous, with amazing outfits and beautiful photography by Francois Nars.

A real A+ to advertiser/designer Balmain. I wouldn’t want to come across this gang in a dark alley!
And I was extremely impressed that every L’Oreal ad was in the E) Strong Woman category. They will get my business!

And look, the ball is literally in this woman’s court in this Ferragamo ad: 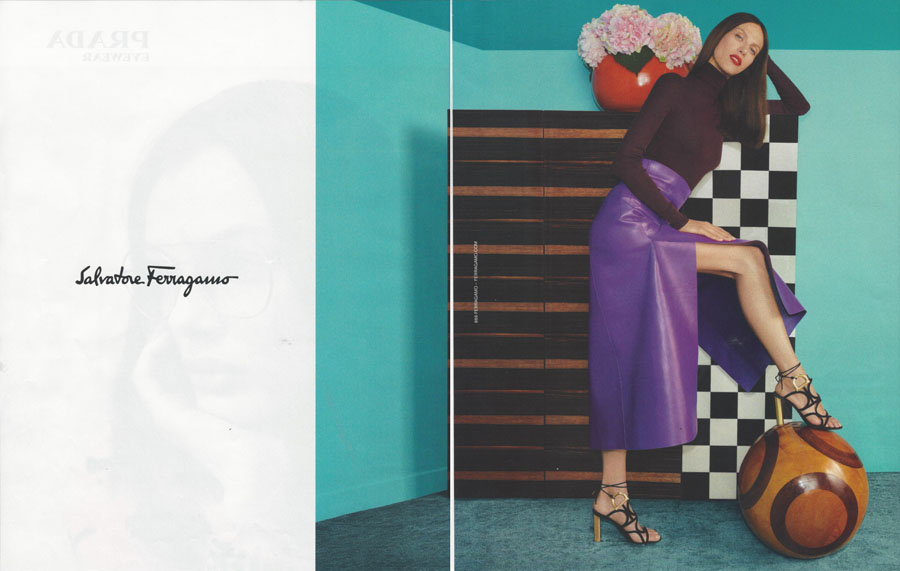 And a couple WTFs, like I can’t determine whether DKNY is depicting street harrassment? If so, then the model looks like she’s thinking, “Men, whaddya gonna do?” Not very empowering. 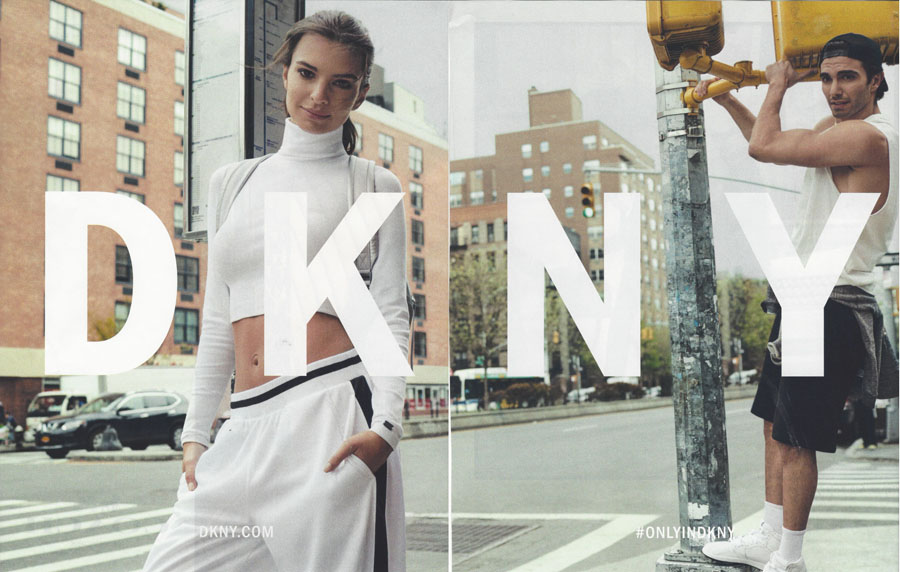 Maybe it’s just me, but this looks like a murder scene. The model’s leg is unnaturally twisted, her face is blank and skin is blue. Also: RED ROOM! Blood-colored walls. 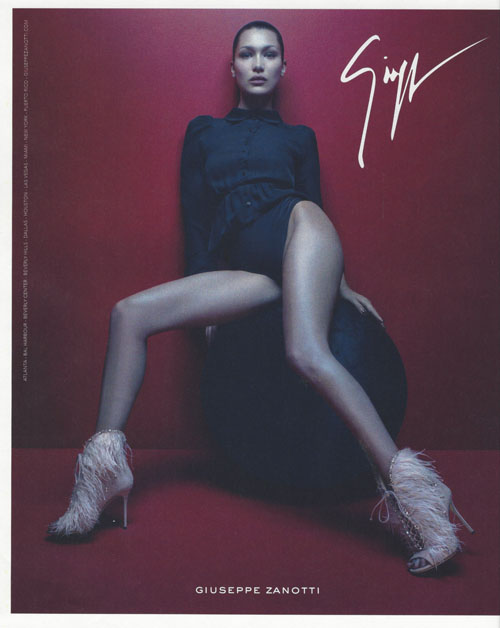 My conclusion, however, is positive after reviewing the September 2017 issue of Marie Claire. Yes, we’ve come a long way, baby. I’m satisfied to see that the designers, photographers, and ad agencies have been listening and hearing us. To all who have shared my findings, I thank you for helping spread the word about misogyny in advertising. As you can see, we’re moving forward.